Studying the earths interior can help us to understand earthquakes, volcanoes, plate tectonics and more about the inner earth's natural processes. These layers of the earth interact in ways that affect every living thing on the earth.

In general the earths interior has been sorted by Gravity. Heavier elements like iron tend to sink toward the center or core of the earth. Lighter materials, the silicates, oxygen compounds and water have risen to become part of the crust. This action has created distinct layers within the earth and is still in process today.

The Inner Earth is composed of three main parts, sometimes called the layers of the earth; the crust, the mantle, and the core as shown in the diagram of the earths interior below: 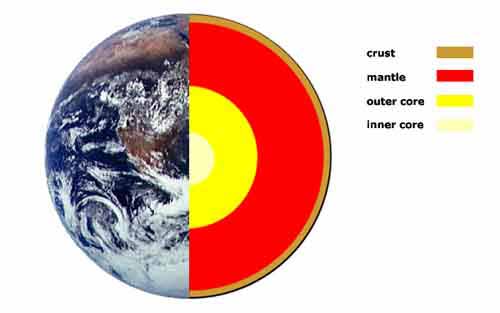 The crust of the earth is very slowly growing thicker. Volcanic activity is continually adding mass to the crust. Though the crust is solid it is made up of about 12 plates. They are called Tectonic Plates. These plates are in constant motion. The movement is caused by convection currents in the mantle. The movement is very slow, averaging about 2 inches a year. This is about like the growth of your fingernails.

Much less is known about the mantle than the crust. The crust we can see, measure, dig and drill. The mantle is different. We have little direct contact with the inner earth. We can tell some things about the mantle by studying volcanoes and what comes out of them.

Much of what we believe is true about the earths interior comes from studying Seismology. Seismology began as the study of earthquakes and the seismic waves they produced. These waves travel through the earth and move at different speeds in different materials. By studying these waves and how they move through the inner earth we can learn about what it is made of.

Some points to remember in studying the earths interior: