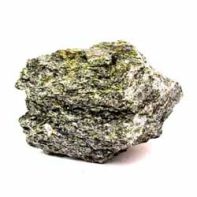 Schist is a coarse grained metamorphic rock. If you look at a piece of this metamorphic rock on the right you may be able to see crystals of the minerals that make up the rock.

It comes from shale or at least at one time it was shale. So geologists say that shale is the parent rock. It is made up of clay minerals.

Shale can metamorphose into slate, phyllite, schist or gneiss depending on the degree of heat and pressure. Schist has a greater degree of metamorphism than phyllite but less than gneiss.

It is classed as a medium-grade metamorphic rock and is associated with regional metamorphism do to mountain building. That means that it is formed when the crust under so much pressure that it crumples up and mountains are formed.

This kind of pressure is because of plate tectonics. The simple explanation is that from time to time pieces of the earth’s crust slam into each other. Pressure and heat are the result. 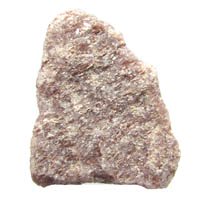 This not only makes mountains but it can also change the rock that the mountains are made of.

Schist comes from a Greek word meaning "to split". A characteristic of the rock is that it splits easily.