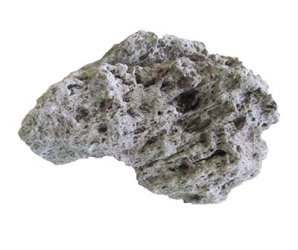 Pumice is an extrusive volcanic rock. It is usually pale in color and very lightweight. This type of lava is characterized as a vesicular volcanic glass. Vesicular is a fancy word for “filled with air bubbles”. When a volcano erupts, gases escape causing fast cooling and depressurization of the surrounding molten lava, filling it with air pockets. This results in a rock so lightweight it often floats! 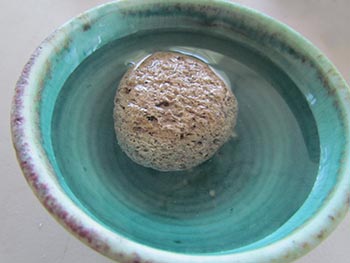 Pumice is formed in very explosive volcanic events. The magma that forms pumice is most often rhyolite, a rock that contain lots of silica. The silica makes the rhyolite magma very dense or viscous. Within this rhyolite magma mix are lots of dissolved gases. Add in the high pressure of the gases trying to escape and you get violent eruptions that shoot the lava high into the atmosphere where it cools very quickly.  The pressure of the trapped gases release suddenly and air pockets form.  Want a simple demonstration of this? Just shake a can of soda and pop the top!

Pumice eruptions can be huge! So big, in fact, that they can cover the area around the volcano with hundreds of feet of pumice. If the eruption takes place near water, pumice rafts so thick that they can stay afloat for years can form on the surface. These pumice rafts create hazards for ocean vessels traveling through the sea.

Pumice is mined throughout the American west. While Oregon produces the most, Nevada, Idaho, Arizona, California, and New Mexico are also places where this igneous rock is mined.

Pumicite is a form of pumice with extremely very fine-grained particles. Also known as volcanic ash, it can be blown far into the atmosphere during eruptions and be spread over areas hundreds of miles away from the original eruption.

Pumice finds its way into many surprising uses. When placed in concrete, it makes it lighter. Light weight concrete is used in many building  materials. It is an abrasive cleaner and polisher and is found in many household products. Solid, but porous, pumice added to soil allows air and water to flow through. It’s even used to replace soil in hydroponics.