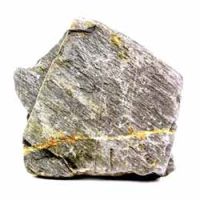 Phyllite is a fined grained metamorphic rock. It is foliated, meaning that it has noticeable layers, and splits easily. A defining characteristic is the shiny surface, called phylitic luster caused by the mica particles within the rock.

It is primarily composed of quartz, sericite mica, and chlorite.

Shale is the parent rock. It is made up of clay minerals. Shale can metamorphose into slate, phyllite, schist or gneiss depending on the degree of heat and pressure. Phyllite has a greater degree of metamorphism than slate but less than schist. It tends to split easily and has a slightly corrugated surfacealong clevage planes.  It is associated with regional metamorphism due to mountain building.

Phyllite has larger crystals than slate. This gives it a greater degree of light reflection or sheen. Slate is usually dull and non reflective.The sheen is used to distinguish phyllite from slate.

Back to Examples of Metamorphic Rocks