Geology maps are an important tool for anyone interested in rocks and rockhounding. They tell you what rocks are at the surface nearly anywhere in the world. They also tell you the geologic age of the rocks in a given area. This type of map is not easy to find in your local bookstore or even a store that specializes in maps. They are easy to find on the internet though. For many years geologists have been mapping the earth, mostly looking for oil, gold, and other valuable commodities. Oil and mining companies keep geologists on their payroll to discover opportunities to expand their operations. They have covered the globe and created maps for everywhere on earth!

At first glance a geology map can be overwhelming. Take a look at the sample map of Texas below. So many symbols, colors, and patterns! In truth there is a ton of information here. There is good reason to feel overwhelmed! To make sense of this or any other geology map we have to chunk it down. This is a little tricky because of the way information is layered on the map.

First lets look at the colors. The colors on the map have 2 layers of information. One for time and one for rock formations. For now disregard the rock formations. Each color on the map represents a time in geologic history. This in itself can be daunting. Eons, eras, and periods are the basic units of geologic time. If you are not familiar with these you will need a reference chart to refer to until it starts to make sense. Here is a geologic time chart you can use to get started. It has an introduction and more detailed information if you want to dig deeper. It is a good idea to print out a copy to have as we talk about understanding how to read a geology map. For now we will focus on the map. 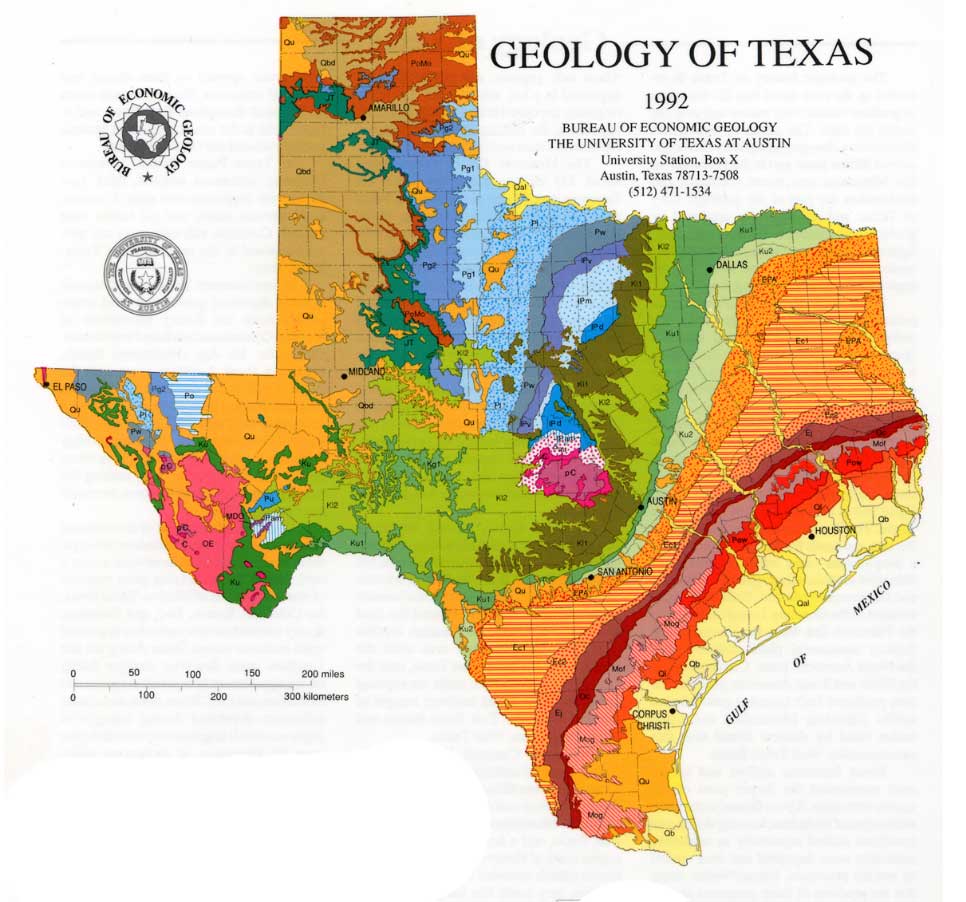 Back to the colors. Generally the blues represent Paleozoic Periods and formations. The greens are used for Mesozoic Periods, and the reds, yellows, oranges, and browns go with the Cenozoic Era. The exception is the hot pink which represents the Cambrian Period which is part of the Paleozoic. The purple color represents Precambrian time. On this particular map the colors of each of the Eras are grouped together.

So you can see that north central Texas is mostly Paleozoic. Moving south is a band of Mesozoic and along the coast are Cenozoic aged rocks.

Now Rock formations are just a unique group of rock layers. Geologists recognize them for their qualities: how many layers, what type of rocks, and the order of the layers. Each distinct formation is given a name and cataloged. Sometimes these layers are only found in certain areas. Often however, a formation can show up hundreds or even thousands of miles apart.

A good example of a widespread formation is the Morrison Formation. This group of rocks was laid down during the Jurassic Period. It is centered on Colorado but outcrops of these rocks have been found in New Mexico, Wyoming, Montana, North Dakota, South Dakota, Utah, Arizona, Nebraska, Oklahoma, and even Texas ( the north west corner of the pan handle).

By studying the rocks in a formation geologists can reconstruct the environment of that location at a particular time.

The Map key below identifies the colors and patterns and lists the formations in order of their formation. 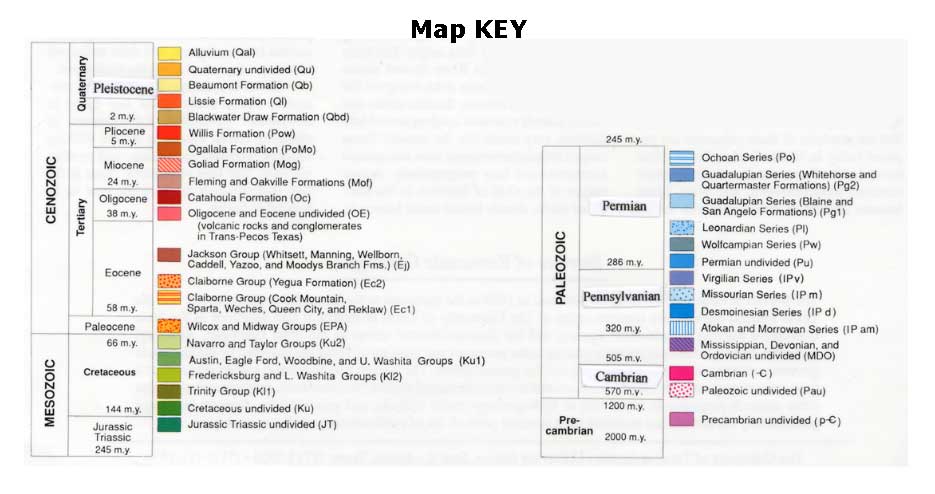 A general note on geology maps:

There are detailed and simplified versions of all of the geology maps.

This is all well and good but how does it help a rock hound?

If you have stayed with me to this point, this is the good part.

I use geology maps in 3 ways.

1. If I want to find a certain kind of rock to use in the rock collections we put together and sell, lets say pumice, I have to find areas with volcanic rocks and then which of those may contain pumice that is close to me. This is just internet research with the aid of the maps.

2. If I am traveling, I bring along a map of the destination and maps of the places along the route. I plan rest stops at places that may be interesting geologically or may have rocks on my find list.

3. If I want to go fossil hunting I know that they won't be where there are igneous or metamorphic rocks. So sedimentary rocks. For dinosaurs it has to be Jurassic or Cretaceous rocks.