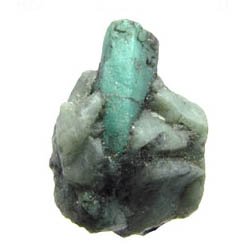 Emerald is the green gemstone variety of the mineral Beryl with the chemical formula Be3Al2(SiO3)6), beryllium aluminum silicate. It gets its green color from trace amounts of chromium and sometimes vanadium. Beryllium is a very rare element in the earth’s crust so beryl is only found in a few places in the world.

Emerald is a silicate mineral and  very hard a 7.5-8 on the mohs scale. but because Emeralds usually have inclusions they are more easily broken than you might guess by the hardness alone.

Emeralds have been valued since ancient times. They have been used as gemstones for over 5000 years. Kings, queens, and emperors, used them to adorn their crowns and thrones. Today it is the most popular of the colored gemstones by far! It is the birthstone of people born in the month of May.

Emeralds can be found in igneous, metamorphic and sedimentary rocks. However because Beryllium is a rare element in the earths crust it does not usually form minerals. It is rarer still for beryllium to form minerals where chromium or vanadium is present. this is why emerald are so uncommon.

Most of the worlds emeralds are found in Colombia, Brazil ,Zambia, and Zimbabwe. Other countries where emerals are found in smaller amounts are Madagascar, Nigeria, Afganistan, pakistan, Canada, and Russia.