Gypsum
Mineral of Many Uses

Gypsum is quite a uniquely versatile mineral, but it is mainly used for industrial purposes, and as a binding agent. In fact, the word Gypsum comes from the Greek word for plaster. It should be no surprise then, that it is the main component in plaster. It can also be found in blackboard chalk, drywall, and in fertilizer. This mineral is sometimes found in an alternate form called alabaster. Alabaster was used in Ancient Egypt, Mesopotamia and Ancient Rome as a sculpting material.

Gypsum is a soft mineral composed of the elements calcium and sulfur, with the chemical formula CaSO4. Gypsum deposits come from the evaporation of lake and sea water, as well as in hot springs, and even volcanic vapors. Pure gypsum is white in color, but other substances found as impurities may give a wide range of colors. This mineral is also called selenite.

Gypsum is classified as a 2 on the Mohs scale, meaning that this mineral is very soft and easily molded and perfect for sculpting.The Mohs scale is a measuring tool, used to describe the density and hardness of a certain mineral. Minerals get their ranking based on the ability to visibly scratch another mineral. For example, Talc has a Mohs rating of 1, and therefor can be easily scratched by any other mineral. By contrast, diamonds have a rating of 10, making them nearly impossible to be scratched. 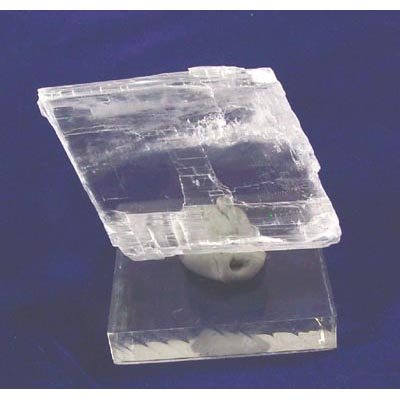 Gypsum was found in abundance, in a region of Paris, and therefore powdered gypsum is commonly referred to as ‘plaster of Paris.’ Like magic, adding water to plaster of Paris will yield hardened gypsum. Insta-gem!

Speaking of magic, in the medieval period, scribes mixed gypsum with powdered lead to make a substance called gesso, which was applied to illuminated letters and gilded with gold in illuminated manuscripts. How cool is that?!

And if thats not weird enough: Ever thought a mineral could have culinary uses? Yes indeedy, trace amounts of gypsum was used as a binder for tofu, it was used in baking as a dough conditioner, reducing stickiness, and as a source of dietary calcium. It was also common ingredient in making mead, and in mushroom cultivation to stop grains from clumping together. Some tests have even shown that gypsum can be used to remove pollutants such as lead or arsenic from contaminated water.

Fun fact: White Sands National Monument in New Mexico is home to a 270 square mile expanse of white gypsum sand, enough to supply the construction industry with drywall for 1,000 years! Commercial exploitation of the area was permanently prevented in 1933, and was declared a protected national monument.

Learn more about the selenite form of gypsum