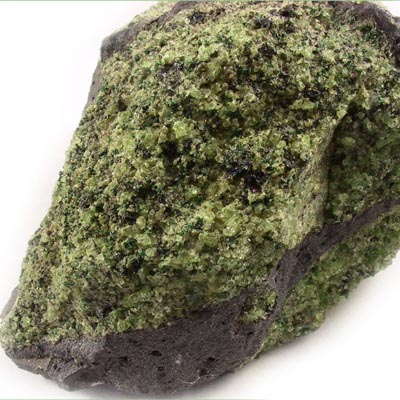 Olivine is a group of minerals including Chrysolite, Fayalite, and Tephroite. It is a naturally occurring mineral that is typically green in color. It has been commonly made into made into gemstones. A gemstone is basically the cut and polished form of a mineral, and typically used is jewelry or as part of collection. Gemstones made from olivine are called peridot. Some of the finest gem-quality olivine has been obtained from a body of mantle rocks in the Red Sea.

The chemical makeup of olivine is magnesium iron silicate with the chemical formula of Mg2SiO4 (Chrysolite variety). In its pure form, olivine rates 6.5 to 7 on the Mohs Scale, making it pretty hard. The Mohs scale is a scale used by scentsts, to rate the hardness or softness of a particular mineral. Olivine is not a rock itself, but a mineral found in types of rock, such as basalt, gabbro, dunite, diabase, and peridotite.

Olivine is actually part of a group of mineral, called the olivine group, that share very similar characteristics. The names of these other minerals are tephroite, monticellite and kirschsteinite.

The high magnesium levels make the mineral stable to pressures equivalent to a depth of 250 miles within Earth. This means that olivine can withstand high amounts of heat and pressure and has been used to as stones in fireplace and stovetops.

Olivine is not only a pretty gem to look at, it is also part of Earth’s crust. Olivine is very rich in magnesium and iron, and occurs in both igneous rocks and as a primary mineral in certain metamorphic rocks. Olivine that is rich in magnesium crystallizes from magma, making olivine one of the Earth's most abundant minerals. Olivine has been found in rocks that make up tectonic plates.

Magnesium rich olivine has also been discovered in meteorites on the Moon and Mars. Such meteorites include chondrites, collections of debris from the early Solar System. Traces of olivine have been seen in the dust disks around young stars and the tails of comets. The presence of olivine was verified in samples of a comet from the Stardust spacecraft in 2006.

To this day, olivine is mined and used. About half of the world's olivine for industrial use is produced in Norway.