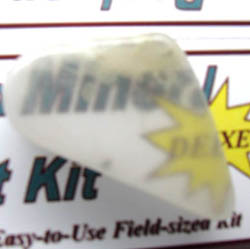 hydrated sodium calcium borate hydroxide. As an evaporate or mineral that forms when sea water evaporates, it is often found with other evaporates like borax, calcite, gypsum and halite.

It is the structure of this mineral that gives it some interesting properties. Ulexite forms crystaline masses or in parallel fibers. It can also form in veins with masses of parallel fibers. These fibers have the ability to conduct light along their long axis by internal reflection.

If a piece of ulexite is cut and polished with flat faces perpendicular to the orientation of the fibers, it will display an image of whatever it sits on to its other side. Because of this it is sometimes known as TV rock!

Ulexite has significate amounts of the element boron. Boron has many practical uses including in heat resistant glassware like pyrex, car headlights, and lab equipment. It is also used in laundry additives to soften clothes, fertilizers and herbicides, and paper products. Most of the boron in use today is mined as borax, colemanite, kernite, and ulexite.

Ulexite will disolve in hot water!

Ulexite is named after the German chemist who first discovered it Georg Ludwig Ulex in 1840.

Ulexite is found in arid locations. California, Nevada, Chile and Kazakhstan are the principal occurrences. In the California deserts it has been mined along with borax since the late 1800’s.

Ulexite specimens for sale at fossilicious.com