The Silicates
Building Blocks of The Earth’s Crust 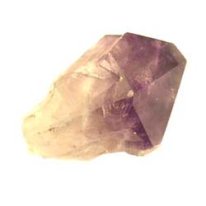 Silicates are the most widespread of the minerals. They are made up of oxygen and silicon the number one and number two most abundant elements in the earth's crust. By themselves they make up over 90% of the weight of the earth’s crust. Most rocks are composed mainly of this class of minerals.

The quartz family of minerals are the most recognizable of this class. Amethyst pictured at the right belongs to this family, as does rose quartz, smokey quarts, citrine, and all of the agates

There are two forms of silicate when looking at their chemistry:

A more modern approach to classifying silicates is by their structure. This class of minerals uses SiO4 molecules connected as tetrahedrons. A tetrahedron is a triangular based pyramid. The oxygen atoms occupy the corners of the tetrahedron with the silicon atom in the center.The arrangement of this basic shape is the basis for classification. There are six subclasses. They are:

How many of these can you pick out of the chart below?

Back to The Gallery of Minerals